Welcome to Dogs of Inaria! You are currently viewing this forum as a guest, if you have an account please log in. However, if you are new to the site I recommend registering to see what Inaria is all about!

Join the forum, it's quick and easy

Welcome to Dogs of Inaria! You are currently viewing this forum as a guest, if you have an account please log in. However, if you are new to the site I recommend registering to see what Inaria is all about!

You are not connected. Please login or register

The life of Junsu 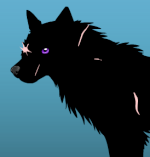 Miniature Biography
Gender: Male
Mate: Who would wants to be mates with a wolf covered with scars?
Experience:

The life of Junsu

Junsu opens his eyes for the first time and looked around wideyed at the vast landscape, The mountains, Shimmering rivers, and the damp forest. Yoona(His mother) Noticed her pup opened his eyes and lapped her tongue at junsu's fluffy fur. "Welcome to the world my little junsu" She said with happiness. Then a heavy thing crashed into him and junsu yelped with fright. "HA! such a scaredy cat" Hyungyu(His older brother) Teased. Oh, so you want a fight? ill give to to you!
He roared like a lion and pounced on hyungyu. He nipped his ears and batted his face like he was batting a stick. Junsu felt a jaw grabbing him by the scruff and got pulled up. His fur britled and he looked up. It was his mother. "Junsu! i do not want to see any of those rough fighting, do you understand?!" Yoona growled at him. The little pup whimpered and backed away with fear. "y-y-yes mother" The pup whined.

"MOTHER MOTHER! Sangbum opened his eyes!" Junsu shouted with excitement. His little brother was born three weeks ago. Hyungyu and junsu ccircled him and stared at him with curiousity. Sangbum had a twisted paw. Yoona nuzzled sangbum and smiled at him. "Why don't you go explore outside?" She urged sangbum. "YEAH! Cmon sangbum! Its awesome!" He and his brother chanted. Sangbum, Hyungyu and junsu ran outside the stuffy den and played tag. They played for ours until it got dark. The pups went back to the den and noticed their mother was not in the den. "Ill go take a look, you guys stay here." Hyungyu pushed junsu and sangbum inside the den and ran outside.

Hyungyu ran inside the den wailing. "What happened? Where is mother?" Sangbum asked hyungyu with worry. Hyungyu was still crying and wailing. "M-Mother was c-c--captured and put in p-p-p-p-prisoners." Hyungyu cried. "No.....no..NO!" Junsu wailed. Sangbum buried his head into junsu's fur. Junsu put his head on sangbum, trying to comfort him. Sangbum must be very sad, more sadder, than him and hyungyu. He only saw his mother for only one day.

The three brothers roamed around the forest and made a den. They heard some shuffling. "Ill go see it" Sangbum said bravely. Junsu and hyungyu didnt say a word. Sangbum got out and looked around then a male wolf jumped in front of sangbum. "GYAAAAAAH!!!!!!!1!!!!!" he screamed. Junsu and hyungyu ran out and looked at the male wolf. 'Who are you? What did you do to my brother?" Hyungyu growled. The male wolf sat down and looked down at them. "Where is your mother? Pups should not be alone. Bears can eat you. Anyways, Names Seungho. Do you want some elk meat? you pups are thin as a stick" Seungho told them kindly. "I am Junsu, He is hyungyu, and the short ones sangbum.Our mother is captured and executed, our father had died in one of the bravest battles. And yes, may we?" Junsu had to raise his paws to talk to him.

Junsu walked happily with his brothers beside the river. Seungho had died from old age, seungho teached them to hunt and fight. Hyungyu sniffed the air and grinned. "ELK HERD!" he shouted. "Your gonna scare all the elks away if your gonna shout like that" Junsu nudged him. The three stalked the smallest elk. "Sangbum, you trap the elk by chasing it toward the river, Junsu, you get on its back, and i will do the death blow" Hyungyu told them. Sangbum and Junsu nodded their heads and and sangbum ran swiftly and speedy to the elk. The elk ran and sangbum trapped it beside the river. Hyungyu gave him the signal and Junsu ran to the elk and jump on the elks back. Hyungyu swished toward the elk and bit its throat, then suddenly the elk kicked hyungyu and sent him flying into the river. "HYUNGYU!!!" sangbum and junsu shouted. There was a waterfall just a few feet from hyungyu. Junsu dived in and swam with the strong current. hyungyu was spluttering and scrambling trying to put his head up. Junsu grabbed a rock. and shouted on the top of his throat. "BITE MY TAIL!!!!!" he screamed. Hyungyu bit his tail hard. He clenched his teeth with pain. "Junsu....im sorry...take care of sangbum, make him into a loyal, corageous warrior. Goodbye brother.." Hyungyu sighed. "NO!" Junsu cried. But it was too late, hyungyu let go of his tail and was swallowed in the waterfall. "Be happy with mother, hyungyu" He squeezed his eyes with sadness. Sangbum grabbed junsu and pulled him up. Sangbum looked at him with horror. "Its all my fault!" He cried.

Sangbum got a terrible sickness, which led him to mother and hyungyu. Junsu was all alone now. A grizzly bear ran up to him and clawed junsu. Junsu roared with anger and fury, but it was to late, A Lightning of pain surged through his body and he fainted.

Junsu woke up and could not see the left side. He put his paw on the left eye. His eye was gone. He felt something, a feeling of anger and sadness mixed together. Junsu's heart got dark with anger, making his fur all ragged with all the battles he fought. Junsu traveled through the forest, wanting to run away from all these memories. Finally he reached an unusual place, it was a lonely place, which he Liked it.

This is where he found the Canines of Inaria

» Count to 35 before the Head Chairman posts!

» The life of Junsu